In my Social Psychology course this week, we spent a class session talking about bathrooms. I decided to devote a full session to it after the topic came up a few times the last time I taught the course. I remember a student making an observation about women going to the bathroom together, and one of his classmates explained that, in some cases, it's a matter of safety. There is a comfort level and enhanced feeling of safety being with friends.

This semester, I used an article from sociologist Harvey Molotch. I love the writing. Here he is, channeling Erving Goffman:


"Our lives are ordinarily carried out through careful – indeed, exquisite – impression management. We adhere to a delicate etiquette of gesture, sound and scent, all so we can display ourselves as dignified, civilized human beings.

Enter: the toilet, which blunders in with sounds, smells and strangers. Hovering above it all is the deepest of pollutants, human waste – often in places where it’s not supposed to be."

And here he focuses on the design of so-called restrooms:


"The design of American public bathrooms can complicate the struggle for a modicum of privacy. In the US, stall enclosures typically have large bottom (and top) openings, along with peek-a-boo gaps at panel seams. The US is a distinctly open society; in virtually every country which has them, toilets have more solid enclosures, with stalls going closer to the ground and ceiling,

The US features probably arose from authorities’ concern, way back when, over what people might do if they had more privacy – specifically, drugs or sex (especially homosexual male sex).

Either way, it’s now expected that when we sit on a public toilet, we expose our feet to the occupant next door. Among other effects, this allows those who know us to make positive and precise identifications based on shoes: another blow to anonymity. Who hasn’t experienced the dread of a boss or colleague plopping down in an adjacent stall?"

Later, he says that "gender segregation continues to deliver injustice" and asks: "Why not open it up and let all genders share the same zone?"


"It would yield a huge increase in space efficiency, while alleviating the long lines at the women’s rooms, which often occur as stalls remain empty in the men’s room. Integration might also enhance safety: more people would be on hand to act in case of emergency. Hanging a “women” sign over a door only keeps out men with good intentions. (After all, those with bad intentions won’t be impeded by a sign.)"

As you can see, the article gave us a lot to talk about. And students were interested. We had a good discussion.

I also showed them an article that imagines some possible bathroom signs of the future. The article mentions North Carolina's bathroom bill. A more recent article provides an update -- the state repealed portions of the HB2 bill, "including the requirement that trans people use the bathroom that matches their birth certificate."

All in all, I believe we had a productive class session, and plan to include this topic again the next time we teach the course.

The day after class, my family and I ate at a newly opened diner in Buffalo that has two bathrooms. Both bathrooms have the same sign. I took this picture and e-mailed it to my class to share with them an image that related to our class session. How would you analyze this sign? 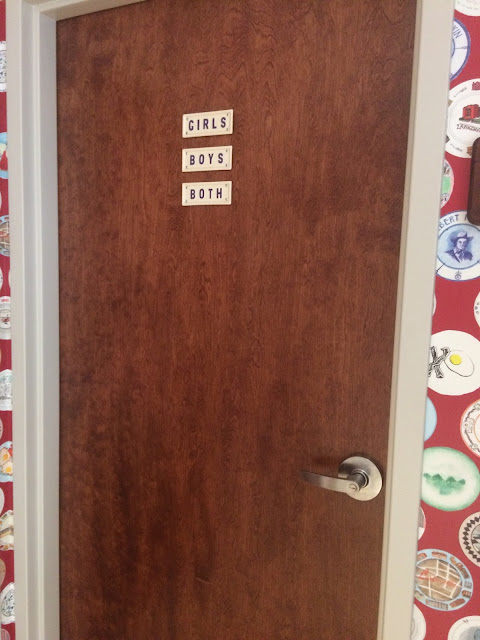 Posted by Todd Schoepflin at 8:50 AM