Martin Luther King, Jr. and Coretta Scott met in January of 1952. In a letter to Coretta in July, 1952, MLK shared a few thoughts about capitalism:

"I imagine you already know that I am much more socialistic in my economic theory than capitalistic. And yet I am not so opposed to capitalism that I have failed to see its relative merits. It started out with a noble and high motive, viz., to block the trade monopolies of nobles, but like most human systems it fell victim to the very thing it was revolting against. So today capitalism has out-lived its usefulness. It has brought about a system that takes necessities from the masses to give luxuries to the classes."


Posted by Todd Schoepflin at 9:13 AM No comments:

A Night Out In Buffalo

My friend of 20+ years came into town. He told me to meet him at the Regal Cinema in some suburb or another. True to form, I showed up right on time, 6:30, when the movie he was seeing with his wife and in-laws would be over. Waiting for Ron, my dear friend who I met in college, I ran into a different friend from college. And not just any friend. He was the very first friend I made at college orientation in the summer of 1990. Always a nice guy with great music taste, I will always remember him as the person who introduced me to Jane's Addiction and The Red Hot Chili Peppers. I don't think I'd seen him since his wedding, about twelve years ago. So it was quite a surprise to see him and his family walk toward me. We hugged and chatted for a few minutes. He couldn't believe I was waiting for Ron; they were good buddies in college too. In hindsight, I should have twisted his arm to join us for a night out. When will I get to see him again?

At 7:00, I got a phone call from Ron. He never made it to the movie. He told me he would get dropped off in 45 minutes at a bar on Main and Transit. I knew which one so there I went. I stood in the crowded bar, sipped a pint, and watched the Sabres game. It's another wasted season, so who cares, but you go through the motions pretending that you do. I finished the pint and waited outside in the cold until Ron got dropped off.

We met one of our friends at a cool new bar in downtown Buffalo, a bar with just the right colors and the perfect price for a bottle of wine. We drank a lot of wine and mostly kept to ourselves. It was my kind of night. Other than small talking with bartenders, we minded our own business and talked to each other about all the stuff we usually do. After a few hours the place began to empty out, so we figured we'd head elsewhere to finish the night. We ended up in the loudest bar of my life on Elmwood Avenue, where the DJ set a new and absurd standard for volume. This was no place for 40-year-olds. But it's good to find yourself in a place you don't belong once in a while. We had one drink and left to get some late night eats. Pano's had just closed, why, I'll never know. I thought that place never closed. So we ended up at ETS where Ron devoured a steak and cheese sub and a bunch of extra saucy and rather hot chicken wings. Sauce all over his face, he paused for a moment to quietly say "This is exactly what I needed." It cracked me up. Meanwhile, I ate a terrible chicken burrito. As for our friend, he fell asleep with his head suspended in air. That's his customary behavior late at night. I half expected to run into a student and was ready to explain why I was hanging out at 2:00 in the morning. Students don't expect to see their professors at certain times or places. After eating we crashed on couches at our friend's apartment. I tossed and turned until 7:00, probably getting about an hour of actual sleep. I don't like being away from my family. I left at 7:00 to get croissants and muffins for my wife and kids, and headed home to resume my life. I'm a creature of routine and habit.

It was a fun and simple night, just the way I like it. No missteps, no shenanigans. I'm getting too old for shenanigans, I think. The trick for me is to try to enjoy life rather than study it. I've always liked observing more than participating. I'm thankful to the people in my life who help me actually live it rather than just watch it.

Author's note: most of this story is true. A few details have been altered.

Posted by Todd Schoepflin at 1:42 PM No comments:

"My mother confronted the age-old problem of the Negro parent in America: how to explain discrimination and segregation to a small child. She taught me that I should feel a sense of "somebodiness" but that on the other hand I had to go out and face a system that stared me in the face every day saying you are "less than," you are "not equal to." She told me about slavery and how it ended with the Civil War. She tried to explain the divided system of the South--the segregated schools, restaurants, theaters, housing; the white and colored signs on drinking fountains, waiting rooms, lavatories--as a social condition rather than a natural order. She made it clear that she opposed this system and that I must never allow it to make me feel inferior. Then she said the words that almost every Negro hears before he can yet understand the injustice that makes them necessary: "You are as good as anyone." At the time Mother had no idea that the little boy in her arms would years later be involved in a struggle against the system she was speaking of."

Source: pages 3-4 in The Autobiography of Martin Luther King, Jr. Edited by Clayborne Carson (1998). Grand Central Publishing.
Posted by Todd Schoepflin at 9:32 AM No comments:

Does Instagram make you envious? This New York Times article suggests that it does. And I quote:


"For many urban creative professionals these days, it’s not unusual to scroll through one’s Instagram feed and feel suffocated by fabulousness"

Well, perhaps "fabulousness" gets to part of it. What do we mean by fabulous? What passes for fabulous in 2014? Whatever it is, I am surely unfabulous. But I won't throw out the fabulous with the bathwater. I quote more:

"Envy, of course, doesn’t operate in a social vacuum. It needs an object of desire. And everyone, it seems, has that friend on Instagram: the one with the perfect clothes and the perfect hair and seemingly perfect life — which seem all the more perfect when rendered in the rich teals and vivid ambers of Instagram’s filters."

I do think the article presents a few interesting observations. I do believe, to a degree, that social media envy exists. We're always making comparisons, always measuring our lives with others in mind. These comparisons work in many different ways. Sure, envy enters the fray occasionally, but so do a host of other feelings and emotions. With regard to envy, I suppose the obvious question is: what makes you feel envy in the first place? Sometimes a picture is just a picture, and doesn't make us feel anything. Or makes us barely feel anything. In some cases, the comparisons will make us feel better about our lives.

I must say, I like the Goffmanesque phrase "stage-managing impulse" that is used in the article. No doubt there are lots of times we want just the right picture. We carefully arrange the details to get the right effect. We try to capture happy in a picture frame, to paraphrase the Steely Dan song "Any World (That I'm Welcome To)." I tried to convey this point in a previous blog post "Making Family Memories." Yes indeed, it feels good to gain approval from our network. But life goes on when we don't receive approval. And I bet most folks manage to be happy enough even if they're not "fabulous." Lots of folks run in social circles without much fabulousness or awesomesaucesness. I'm one of them. I live my life without much awesome to present to the world. Like others, I feel a bit of envy here and there. But no cause for Instagram Panic.

You can probably tell I wrote this a bit envy in cheek. I am somewhat relaxed and relieved now that the Fall 2013 semester is coming to a close. There are final exams to give and grade, but I'm almost done. So I'm having a little fun here.
Posted by Todd Schoepflin at 2:04 PM 1 comment:

Society has determined that bacon is the answer..... 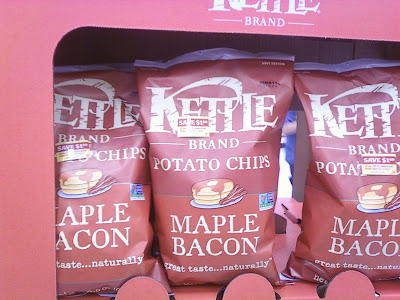