Where is the Love?

A few months ago, one of my students interviewed me for her Sociology of Family class. I answered her questions in an e-mail. I checked with Tina, my wife, to see if she thought this is an accurate portrayal of what we do. She does think this correctly captures our life. Here is the interview:

1. Describe a typical 24-hour day in your life during a week and a typical 24 hour day on a weekend.

Weekdays are  hectic. We get up between 6:00 and 6:45. Tina (my wife) and I get ready for work, and we share in the work of getting the kids dressed, making them breakfast, cleaning up after them, packing lunch. Tina usually takes Mack (3 year old) to day care and I usually get Troy (6 year old) on the bus. Our kids don't sleep in, so the weekend is get up early (6:00-6:45) and do stuff all day long as a family. This winter has been long and boring -- we spend way too much time inside, and spend too much time watching TV. But when it's warm we're all out together, the kids ride bikes and scooters and play soccer and run around. And we spend a lot of time at playgrounds and meeting up with friends who have kids. We hang out from sun up to sun down!!!

2. Who stays home with an ill child and who makes and keeps dental and medical appointments?

We are SO VERY LUCKY that our kids are in good health. Tina is more likely to stay home with a sick kid when it happens, and there are times I do it too. We are also very lucky to have several family members to pitch in. Both of our parents help on a regular basis. And so there are times when Tina's parents or my parents will watch a sick kid so that Tina and I don't have to take off from work. Tina is highly organized -- usually makes the appointments but we share in the work of who takes the kids to the dentist and doctor. Most of the time we actually go together. We've probably been to at least 100 appointments together over the years (probably more, no exaggeration) -- the doctor, immediate care, etc.

3. Who takes and picks up the children from school, who buys the groceries, services the car?

I am the grocery store champion. I do most of the grocery shopping and most of the cooking. I spend a good portion of my life at the grocery store. That is sad but true!!!! "Servicing the car" basically comes down to oil changes -- I usually take the car for oil changes. I am not "Mr. Fix It" as they say. Luckily my father-in-law is "Mr. Fix It" and he helps us a ton (and in the process, saves us $$$$). I am close to worthless in terms of fixing things around the house or fixing the car. But I'm very good with other things that need to get done. For example, I currently am doing Mack's laundry and gave him a bath about an hour ago. Tina almost always picks up Mack from daycare. Troy takes the bus to and from school -- there are days I get him off the bus, and there are days when my mother-in-law gets him off the bus. We're a family operation. There are a lot of people who pitch in!!

4. What type of childcare does your family have, and how was it selected?

Mack goes to daycare three days a week -- Tina played the major role in selecting the daycare. She did a lot of research before we selected the daycare. My in-laws watch Mack one day a week and my parents watch Mack one day a week. So it's great to have family involved and that he doesn't have to do 5 days in daycare. It also saves money, of course. I'll say it again, we are very lucky. Troy is in first grade so he's in school all day. I used to stay home one weekday every week until this school year actually. So I was home one day a week for the first years of Troy's life and the first few years of Mack's life. Tina was able to take significant maternity leave when both of the kids were born, so she got to spend several months with them as babies before she returned to work. We're all home together in the summer. Tina works at a school so she's home in July and August and I'm home in summer too. So we're one mostly happy family in the summer months.

5. What activities are the children involved in after school, and who gets them to these activities?

Throughout the year Troy does soccer and baseball, and he's doing floor hockey now. Mack is doing soccer for the first time. We limit it to one activity at a time. We try not to overdo it. We all go together. We have fun with it. Mack's been watching Troy for years, now he finally has a turn to do something for himself. We all go as a family as much as possible.

So we're a good team unit -- I consider us an "egalitarian" marriage in how we share the work (to use sociology lingo!). I don't know if there's such a thing as 50-50 but I think Tina and I share the work pretty equally. I like to say we're both doing stuff constantly, all the time. Tina does a lot of stuff that I don't do: sends cards to friends and family for key occasions, makes plans so we have a social life, buys gifts for birthday parties for relatives, decorates the house, does a lot of gardening, does a lot of the cleaning. I do cleaning too, but she does more. She teases me that I don't dust, and she's right about that! We split up a lot of household tasks like ironing, putting laundry away, etc.
Posted by Todd Schoepflin at 10:47 AM No comments:

Two songs I like about imagining different life situations:

2) Nick Drake, "One of These Things First"

Posted by Todd Schoepflin at 9:16 AM No comments: 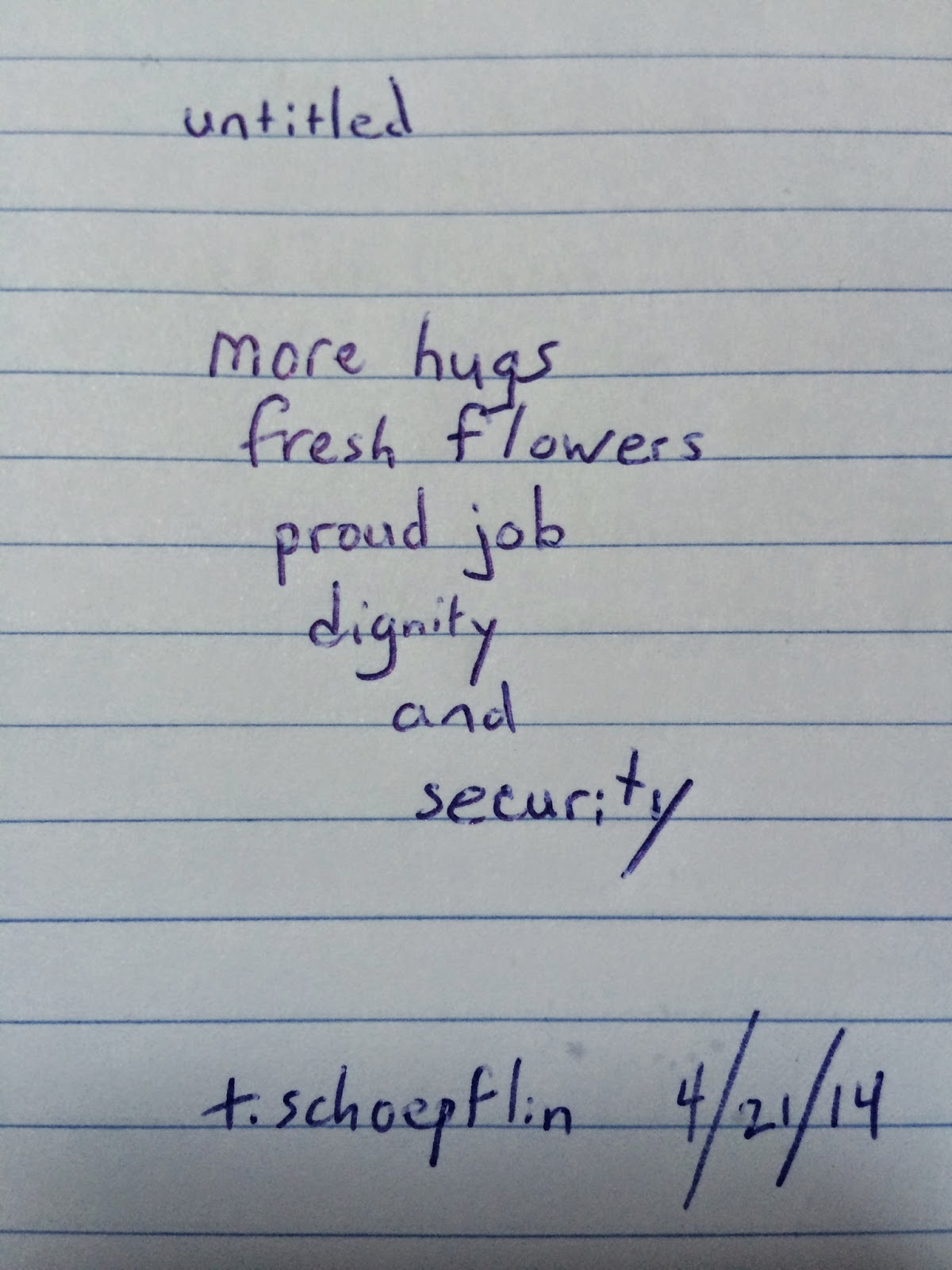 Posted by Todd Schoepflin at 12:28 PM No comments:

It's finally baseball season! Matt Loveland, a sociologist at Le Moyne College, is passionate about baseball. If you follow him on Twitter, you'll see him occasionally tweeting about baseball. I wanted to get his take on a few baseball matters. He generously agreed to an interview.

I'm making a prediction: instant replay in MLB is going to make little or no difference beyond slowing down game.
— Matt Loveland (@mtloveland) March 30, 2014


So, you get to slow down the game to decide if you're going to challenge? And then not do the replay? Nothing is certain! #modernity #mlb
— Matt Loveland (@mtloveland) March 31, 2014

The End (or perhaps to be continued, after Matt and I get together this summer to watch a minor league baseball game in Buffalo!)

5:00 p.m. you walk into a near empty restaurant for takeout. You ask the bartender "How long will it be?" and she replies "Long enough to have a drink." Sounds good to take a break from your everyday so you ask for a beer and life is good. Upon your first sip you notice the guy to your left is drunk as a skunk. Here he comes. You've been in this scene before. So many times an extra drunk person has interrupted your space and talked in your face. It's happened so many times that you have a skill for how to respond. As usual, you play nice, even when he asks to put on your glasses. You indulge him and he is pleased with the opportunity to try on your glasses. He seals your approval by saying "You're cool bro." You've passed his drunken test. Now you're in the clear.

The drunk turns to his left and chips away at someone who appears to be a friend. He begs the man to go to one more bar for one more drink. "Please, please. Just one drink." The man protests again and again: "But I'm married." The drunk man persists and finally convinces the married man to go to another bar. They head for the exit. Your food is ready so you grab your bag and pat the drunk man on the shoulder as you walk past them. You say "Have a good night, gentlemen." You open the door to parking lot sunshine. Head up, you walk to your car with a confident feeling. You buzz home and move on with your life.

Author's note: story about my recent encounter with a drunk person.


Posted by Todd Schoepflin at 10:02 AM No comments:

so much depends
upon

beside the orange
cones 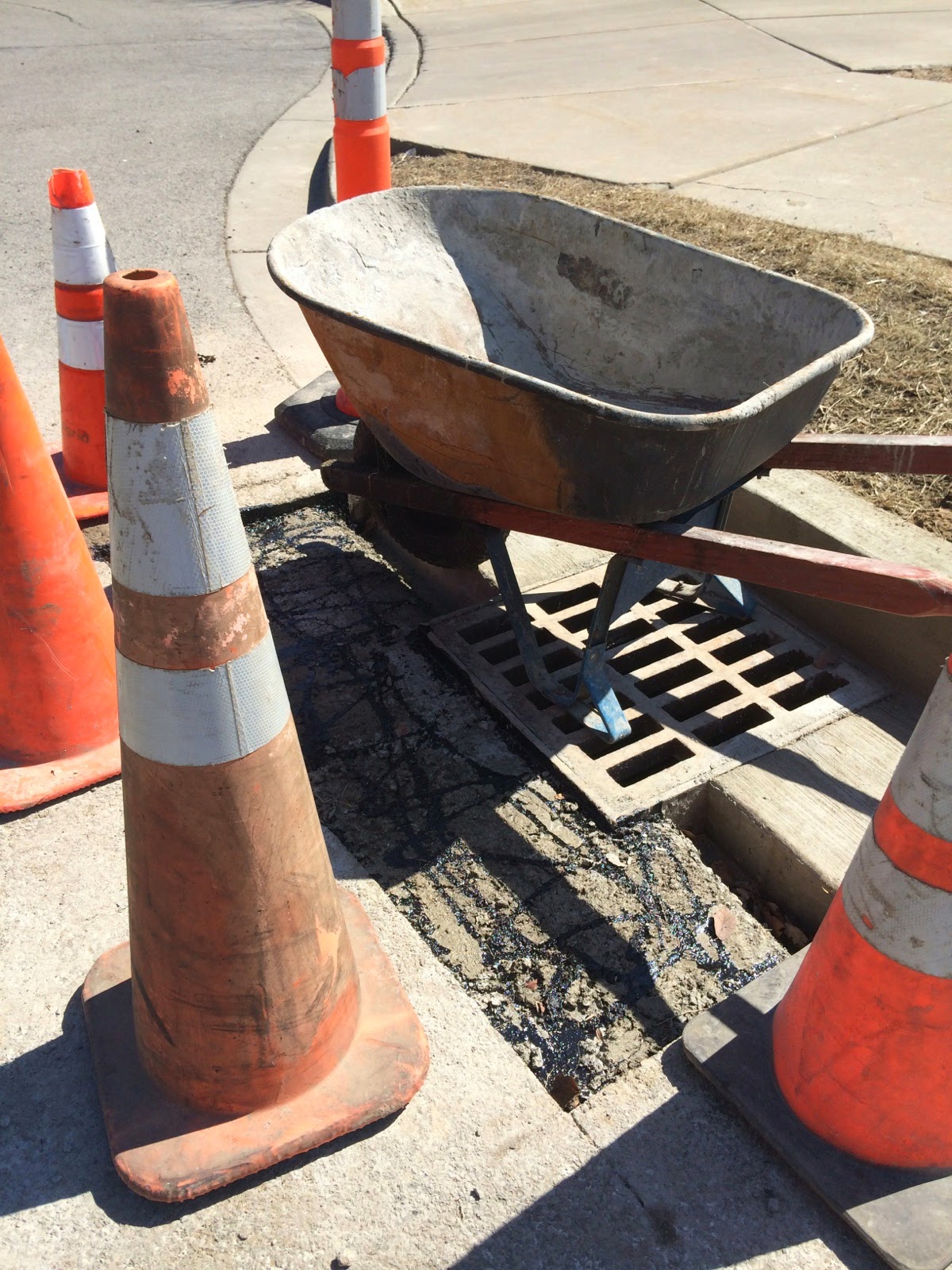 Inspired by William Carlos Williams, "The Red Wheelbarrow"
Posted by Todd Schoepflin at 1:12 PM No comments:

Posted by Todd Schoepflin at 9:19 AM No comments: