So...been driving past this sign at a nearby Wendy's. 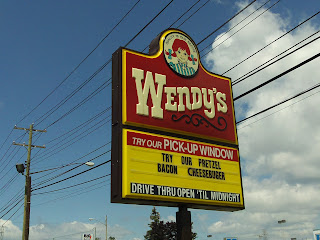 According to Wendy's website, the Pretzel Bacon Cheeseburger is 680 calories. The sodium content is 1110 mg, almost as much as recommended daily levels.

I politely decline the invitation to try this cheeseburger.

By day he was director of the Buffalo Institute of History, composed, cool, and capable in his position. By night he fell to pieces, sleepless, ashamed, and angry.
Considered by some to be a hero for implementing his plan to turn the former Central Terminal into an education site--in just four years the Terminal transformed from a cold and dusty architectural wonder into a place where both local residents and tourists learned about Buffalo's place in history--Green was coming apart quickly, seemingly unable to hide his skeletons much longer. Always engaging in the daytime hours, always able to impress a group of visitors with his knowledge of grain elevators and steel production, Green would rush home at 5:01 each afternoon, lock the doors, screen his calls, and cower in his one-bedroom apartment. Desperate to participate in the nightlife that was going on around him, Green instead hid from people once his work day was done and nervously counted the hours and minutes until he had to return to his place of work the next day. All that kept him going was thoughts of the weekend, which meant two full days to work on his escape plan. He needed as much time as possible to discover a way out of this mess. Confined by convention from Monday to Friday, the weeks and months went on without him as he continued to pray for a better day. He wished for a day without worry, a day without anxiety. He tried to conceal his state of mind by working pleasant phrases into his daily interactions--“no worries” he would tell the co-worker who made a mistake on the job, “never better” he would tell his neighbor when asked how he was doing.
At on a Thursday a group of college students visited the Institute for a one-day crash course about architecture. Green offered glowing remarks about Wright, Olmstead, Richardson, and Sullivan. He beamed when he spoke about the and the . He stole phrases from The Fountainhead as he talked about the nobility of architects. He charmed the group with his well-rehearsed spiel: “The Buffalo Central Terminal opened on June 22, 1929. That means we have a little more than twenty years to plan the 100th anniversary party of its opening!’’  The crowd laughed.  “Oh you laugh now,” he teased, “but 2029 will be here before you know it!  In 2029 we’re going to have an amazing party. We’ll celebrate with a “Roaring 20s” theme. It’s going to be a party unlike has ever seen!” The group was fooled by Green’s schtick. They were unable to see through him.
Relieved when his work day was done, Green quickly headed home and followed his usual routine: lock the doors, dim the lights, and spend the evening in the room with no windows. Hours of dark thoughts passed. He tried to turn in early--at 10:00 p.m.--but at he was still awake and afraid. Couch to bed, bed to couch, and couch to bed once more. It didn’t matter. It seemed like yet another sleepless night. Somehow Green managed to drift off to sleep by 2:00 a.m., and he was surprised to awake to the sight of his alarm clock, which read . Two hours felt like a lifetime of sleep, and with pleasure in his mind and body he fell back to sleep. His good feeling was short-lived. He encountered a nightmare sometime during the five o’clock hour. The nightmare ended with a television news clip: The circumstances surrounding Thomas Browning’s death remain mysterious. The philanthropist, well known as a central figure in the genesis of the Buffalo Institute of History, was last seen on a train leaving that was destined for . There is no official cause of death, but we are led to believe that Browning committed suicide. Images of Browning falling from the train startled Green out of his slumber. He went to the entrance of his apartment and peered outside his door.  He was relieved to see that no one was there. He was sure that someone was coming to get him.
On Friday, back to work, Green did his best to conceal his misery. He continued to receive accolades and positive press. Friday’s edition of The Buffalo Times heralded him as a savior of the old Central Terminal. He was characterized as someone who had fought the good fight, a man who refused to believe that the Terminal was a dinosaur and one who was determined to breathe life into a building that he loved. In some ways Green’s life had become a test, an experiment: how long could he function without coming unglued? Was it a matter of months, weeks, or days before his secret caught up with him?
After work on Friday Green packed his bags. He figured he’d get lost in for the weekend. He’d wait in until he made the exchange with Gottlieb. He wished he could trust Gottlieb, wished he could confide in him. But Gottlieb wasn’t a friend. They were forced into an association because each had something the other needed. Gottlieb didn’t know Green’s secret, he just knew Green had something to hide. Gottlieb took pleasure in seeing Green squirm. That was his way.
When Green arrived in he checked into a hotel. He sat by himself at the hotel bar drinking the day away, wishing he could turn back the calendar four years. This mess was four years in the making. One bad decision had led to another. Lies turned into bigger lies. Deceit became his everyday. He continued drinking, wondering if his secret would die with him.


His secret? He knew well the person who pushed Browning off the train.

Author’s note: I wrote this story in 2005. I submitted it that year to Artvoice for a short story contest. The story was selected for second or third place (I can’t remember which one).

Man of Distinction (A Sociological Poem)

Can you tell us your secret?
How did you get such great taste?
So cool how you wear something new
You always find the perfect restaurant
You even know who to read
You stay one step ahead of us
And when we catch up you’ve already moved…..on

It’s all so perfect because you present the everyday man façade
Everybody (and I mean everybody) can relate to you.
You’re an amazing balancing act
You distinguish yourself from the rest of us
But never act like you’re better than us
And that’s why it works so well.

Year in, year out, you find it before we do
You know exactly how to work the display
It’s an intangible thing
A skill we can’t compute
If asked about it, you wouldn’t even field the question
Or you’d say something clever (“I like what I like”)
But can it be so simple?

You’re a class act
You make it look so easy
Today it’s vodka
Tomorrow a cigar
Then an obscure ingredient (“Ooh, I never heard of that one before!” we say with delight)
Top it all off with a philosophy you found around the corner.

It’s incredible, all these tricks up your sleeve
We’re dazzled by the impressions you leave
You don’t have more than us
But you’re a man of distinction
And that’s enough.

Author's note: I wrote this poem to convey sociological ideas that captured my attention at a time I was reading a lot about social class--notably, the book Facing Social Class (edited by Susan T. Fiske and Hazel Rose Markus) and the blog post "High Heels And Distinction Among Women" by Lisa Wade. My poem appears in the blog post "Poetic Sociology," written by Peter Kaufman. Check out his post for great ideas about using poetry to teach sociology.

On a related note, I'm in the middle of reading a work with great insights about social class--Shamus Rahman Khan's Privilege: The Making of an Adolescent Elite at St. Paul's School. I recommend this book and think it's a good fit for an undergraduate course on social class/social stratification. I'm thinking of teaching Social Stratification next year (would be first time teaching course) and will likely assign Khan's book along with Fiske and Markus' book, plus a few short readings (including the one mentioned above by Wade).
Posted by Todd Schoepflin at 1:59 PM No comments:

Here are two stories from my intro-level book Sociology in Stories: A Creative Introduction to a Fascinating Perspective.

"America the Beautiful" is a fictional story about the future of society. The topics are immigration, social class, physical appearance, media, education, and inequality. Click here for a less than perfect PDF file that I made.

And this is "Iron Cage Tattoo," a story designed to creatively introduce students to Max Weber's ideas about bureaucracy. Click here for another imperfect PDF.

I encourage your comments about these stories, so don't hesitate to e-mail (tas@niagara.edu) or tweet me (@CreateSociology).

Finally, click here for my description of the book and what motivated me to write it.


Posted by Todd Schoepflin at 11:47 AM No comments: