What happens when a sociologist crosses a historian in a parking lot? This morning, as my colleague Michael Durfee and I walked into our office building, he told me he wanted to share something that Martin Luther King said about poverty. Michael, a Ph.D. candidate in the history department at SUNY Buffalo, pointed out these words from Dr. King:


"Poverty is a glaring, notorious reality for some forty million Americans. I guess it wouldn't be so bad for them if it were shared misery, but it is poverty amid plenty. It is poverty in the midst of an affluent society, and I think this is what makes for great frustration and great despair in the black community and the poor community of our nation generally."

Michael provided me with background information about this quote. Dr. King appeared at the sixty-eighth annual convention of the Rabbinical Assembly on March 25, 1968. At the convention King responded to questions submitted in advance to Rabbi Everett Gendler, who facilitated the event. The answer that you see above was in response to a question about the Kerner Report and how to work towards social justice and equality.

Michael and I have a shared interest in inequality. Earlier this semester, we both attended a panel discussion about inequality. At the event, a viewpoint was expressed that poverty in America isn't so bad. The basic point was that poverty is much worse in lesser developed countries. After all, poor people in America have TVs, so how bad can poverty be? I strongly disagree with that line of thinking. I don't think that any poverty is good poverty. When Michael showed me these words from Dr. King, he referenced the panel that we had attended. The passage reminds us of how difficult it is to endure poverty in a rich nation. Poverty is difficult to endure anywhere. But there is an extra layer of frustration and strain that impoverished people experience in a land of plenty. If everyone is poor, it's hard to be poor and it doesn't feel good. It sure doesn't feel better (maybe it even feels worse) when you're surrounded by excess.

I hear people say we are a race-obsessed society.

I beg to differ.
We are a race-dysfunctional society.
We don’t know how to talk about race.
We don’t understand race.
We confuse race and ethnicity.
We talk past each other, not to each other.
We wait until a fool says something foolish
(“Nappy-headed hos”)
and then we talk about race, mediated by media.
We ask the wrong questions
(“Why can’t I say the N word if they get to say the N word?”)
and jump to the wrong conclusions
(“We have a black president so how can we be racist?”)
We have race fatigue.
We are tired of talking about race.
We don’t understand why people don’t get along.
We just wish people would relax and get over "it."
But we can’t wish race and ethnicity away.
Race and ethnicity are us.

Why are we afraid of honest history?
Do we have to hear about the Pilgrims and Indians again this year?
How about history reduced to glossy magazines?
So much amazing African-American history
(amazing American history)
that is disrespected by a shabby supermarket display.

If race doesn't matter then why does it matter?
Is your school diverse?
Is your neighborhood diverse?
How dare we say race doesn't matter?
Why do we ignore the power of symbols?
How does the Cleveland Indians logo still exist?
Why is it cute for kids to dress "like Indians" on Halloween?
Why do high school kids want to perform a blackface skit?
How dare we say race is no big deal or it's just a joke?
If race is a joke, I'll never get the punchline.
And I'll never find inequality funny.

None of us are perfect when it comes to race.
No one can know everything and know exactly what to say.
Let's start by dropping the claim of being color-blind.
And keep our eyes out for stronger lenses to see arrogance and privilege. 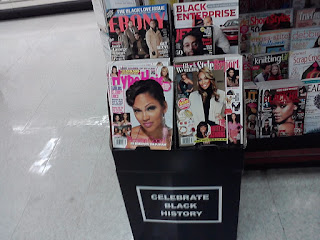 Author’s note: I took a picture of this display at a supermarket in Buffalo, NY in February 2011.

Author's note #2: I highly recommend Peter Kaufman's recent blog post about racism, which includes his analysis of a blackface skit that took place at a high school.