Walking through Times Square recently, I noticed a muscular man wearing only a purple Speedo. Times Square is pretty much a circus, so a man in a purple Speedo isn't far outside the frame. But he wasn't just another guy walking through the streets. He is going to be on-air talent for the soon to be HOTT News. The man plans to deliver a daily weather forecast in his purple Speedo. His on screen name? Purple Rain. Must be a homage to Prince, I assume.
Keep in mind that HOTT News has not actually gone to air yet. Tourists didn't seem to care that HOTT News isn't yet on television or that Purple Rain has never been on TV. Fans lined up for his autograph and excitedly took pictures with him as he delivered a three-day forecast through a megaphone. "Tomorrow we'll have plenty of sunshine, but on Tuesday you should expect strong winds, and by Wednesday, the sky will open up and bring....you guessed it...purple rain!" The crowd roared.
Purple Rain basked in the attention. He seemed comfortable in his Speedo and looked ready for prime time. "How do you stay in such great shape?" asked a middle-aged woman in the crowd. Without hesitation, he replied: "I have my own workout program. You'll see it someday on my DVD." It was like he had waited his entire life for the question.
Posted by Todd Schoepflin at 6:35 PM No comments:

It's True, I'm Not That Important

I like giving advice, and I like getting advice. Leading up to my sabbatical, I asked my colleagues for their advice with respect to being on campus. Should I disappear? Come around occasionally? It's not as if I'd be travelling to another country. Realistically, I knew I'd be local, so I'd be inclined to come to campus once in a while. The general advice I received was to stay away. The advice didn't have to do with negative attitudes about our institution. Rather, it was practical advice to maximize time away from campus. It was basic advice to actually take a rest from all campus activity. Walking with a colleague about a month before my sabbatical, he said: "Don't worry about not being here. You're not that important." And he was right. We're so used to being on committees, going to meetings, advising students, and most importantly, teaching, that we come to see ourselves at vital to the lifeline of the institution. In fact, we're not that important. Campus life goes on without us. I'm two months into my sabbatical, and only one student has e-mailed me to end my sabbatical. But even my one fan will survive without me!
I haven't entirely followed the advice to stay away. I actually like dropping in once a week or so to change up my work space. I can only write at my kitchen table for so long. It's nice to stop in, grab mail, chat with colleagues, say hi to students, do some work, and scamper back home. Last week I took my four-year-old for a campus stroll, something I normally don't have time to do. And it's nice talking with people without being in a hurry. Stop and smell the academy, I guess!
As my sabbatical continues, I plan to go to campus sporadically to grab lunch with friends, talk with students and colleagues, and do work in my office or at the library. In my experience so far, I haven't felt like staying away entirely. But my colleague was exactly right: I'm not that important. So I will continue to do what's worked for me: mostly stay at home, write and read at my kitchen table, and enjoy a mix of productivity and relaxation.
Posted by Todd Schoepflin at 10:01 AM No comments:

Email ThisBlogThis!Share to TwitterShare to FacebookShare to Pinterest
Labels: sabbatical

Love on the Side of the Road

Driving to my parents' house in Niagara Falls, New York, once the honeymoon capital of the world, I saw a filthy truck with an even filthier stuffed animal affixed to it. A man sat in the driver's seat with the window rolled down, on the side of the road. He was selling flowers. Is this what love has come to? Love on the side of the road? Man, I wish I made country music for a living, because that's a basis for a hit song if I ever knew one. I almost stopped to ask his permission to take a picture of him and his temporary small business that sells love in a truck, but I decided not to bother him. The guy was just trying to make a buck. I bet he'll have some customers. Yesterday, the guy behind me at the grocery store slammed a cheap vase with a few flowers in it onto the conveyor belt, along with a card. He seemed pretty pissed about the whole thing. Maybe he was just trying to play it cool.

Meanwhile, my four-year-old is getting socialized to buy into Valentine's Day. He had to make cards for all his classmates at preschool, all the boys and girls. Times have changed. Back in my day it was feast or famine, either you were the type of kid to get a lot of valentines or none, so you could find a bunch of cards waiting for you or end up like Charlie Brown. My little guy had fun making valentines for everyone in his class. With help from socialization agents--school, family, friends, and media--I'm sure he'll be a Valentine's Day pro someday. I just hope he doesn't buy love on the side of the road.

The End
Posted by Todd Schoepflin at 6:00 PM No comments: 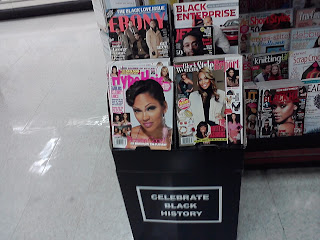 HOTT News is the brainchild of Steve Rose, a young man who describes himself as a "rich kid from Malibu." He is busy courting investors as he develops a twenty-four hour news channel. He does not consider himself an expert in cable news. At 24-years-old, he depends on a wise source to understand the history of cable news: his father. "My dad tells me that CNN used to be relevant, which is hard for me to believe," says Rose, finishing a game on Xbox. Rose doesn't care much for news, except to the extent that it can make him money. Rose is rich by virtue of inheritance. Other than the Jaguar he drives, he does not possess a lot of material goods. He is determined not to squander his riches. Even with slight understanding of the cable news industry, he sees opportunity: "Look at Current TV. Actually, don't. It'll hurt your eyes. What's going on over there doesn't make sense. 'Let's go left of MSNBC.' How is that a successful strategy?"

Rose flips through the channels as we talk, staying on MTV for a while, then ESPN, and lands on Fox News. "Everything about Fox News has already been said, so I won't repeat it. I'll only say that the clock is running out. Sooner or later, their viewers will get it. And then they'll change the channel." So where will the viewers turn? Rose hopes it will be HOTT News.

Rose has a vision of a channel in which news is delivered in unconventional ways. "The anchors and reporters will be, shall we say, hot. Very hot." But won't that compromise the integrity of the content, I ask him. "Integrity? You live in America, right? Where do you see integrity? Integrity has left the building. Enter hotness." Confused, I probe for a clearer description of what viewers can expect if HOTT News comes to fruition. "Look, it's not going to be a case of opinion masquerading as news, or news hiding behind a thin veil of supposed objectivity. This is not your parents' cable news station. This is MTV meets ESPN meets the old CNN." That doesn't make any sense to me, so I ask again what he means. Frustrated, he offers a blunt answer: "Hot people delivering news and opinion. But finally, you'll know which is which. That's it." Is he concerned about what demographic he will attract, or what segments of the population he will leave out? "Absolutely not," he says with confidence. "Everybody likes hottness shaken and stirred." Still confused, I thank him for his time, and leave the interview very concerned about the future of cable news.

Posted by Todd Schoepflin at 12:51 PM No comments:

I have mixed feelings about extra credit. I've noticed that conversations about grade inflation usually don't include mentions of extra credit. I'm concerned that extra credit helps inflate grades. There's also the matter of paying students to do things. Not with money, of course, but with points added to exams or assignments. It's hard for me to prioritize extra credit opportunities. I want students to attend the events that my colleagues organize: film screenings, lectures, panel discussions, plays, etc. I want to help the undergraduate or graduate student who needs to administer surveys. But where does the line get drawn? How do we decide when to say "yes" or "no"? Like a lot of things in life, I decide on a case-by-case basis. But there seem to be unlimited extra credit opportunities for our students. What are your thoughts about extra credit? I would love to hear perspectives and stories from teachers and students. Is extra credit simply a norm? What message is sent to students when they are rewarded extra points for attending events? Do you make a distinction between extra credit for going to events and extra credit for doing additional work, like a paper that isn't required in a course? This post is a short and simple effort to solicit feedback. Thank you.
Posted by Todd Schoepflin at 9:40 AM No comments: