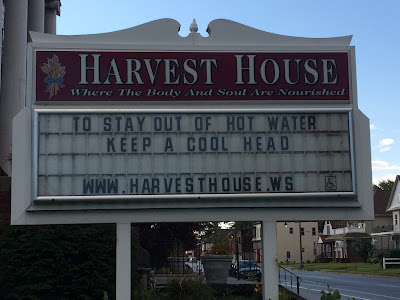 I'd been meaning to take a picture of this sign, having noticed it recently during my commute. It caught my attention as a good sign to show my students when I teach the sociology of emotions in my Social Psychology class later this semester.

I looked at the sign yesterday as I drove home from work yesterday. The sign reminds me of how it's important to me to keep cool and stay composed. I rarely lose my temper, and I almost never get angry in public. Those occasions are so rare that I clearly remember them, even though the episodes are many years apart and one of them may as well have been a lifetime ago.

Just after passing the sign, a driver in a small car drove erratically and cut off the driver in front of me. It was terrible driving, a rude act, no doubt about it. It called for some gesture of "my bad" but instead the offending driver stuck his head out of the car to yell at the man he cut off. The driver in front of me was not having it. They started jawing and suddenly it was two men shouting at each other. This all happened fast--the time it takes to sit at a red light and move slowly through busy city traffic. The man in the small car suddenly turned his car around to park on the other side of the street, and ran toward the car in front of me. He was wearing sweats and slides. He gestured wildly at the man, spreading his arms wide in a threatening manner. He had a crazed look in his eyes. He looked more than ready for a fight. The guy in front of me never got of his car. They yelled at each other but the man in his car prevented physical violence by staying in his car. I thought the angrier man might punch through the open window but it didn't happen. There was a little more yelling, and then it surprised me when the angry man ended up walking back to his car. He found one last second to shoot me a look, as if to say "You want some of this?" but I gave him nothing to react to. Traffic began to flow and so ended the confrontation.

This morning I drove back through the area where this all happened, half expecting to see the angry man going about his business, but it was an uneventful trip to finally take the picture of the sign. The only interaction that stood out to me was a couple that hugged at a bus stop. It was nice to see an affectionate public display in nearly the same spot where I witnessed the uglier side of human behavior.