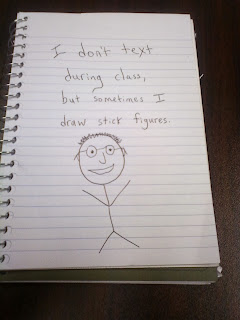 I think it's good when students are exposed to a variety of policies. And I think it makes sense for instructors to experiment with different ways of handling the situation. It helps me to share information and compare notes on how we respond to students using devices during class time. I'm always interested in hearing what other instructors and students think about this matter. I hope instructors and students will add their comments to this post. I'm interested in what kind of policy you prefer: "strict," "flexible," or whatever else you have tried or experienced. I like to think we're doing the best we can to figure this out together.
Posted by Todd Schoepflin at 12:15 PM