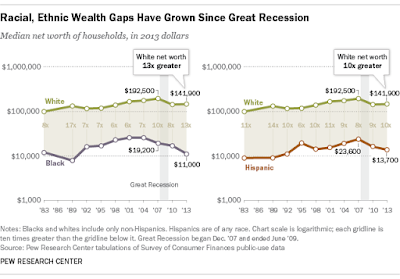 Next, I showed differences in homeownership rates: 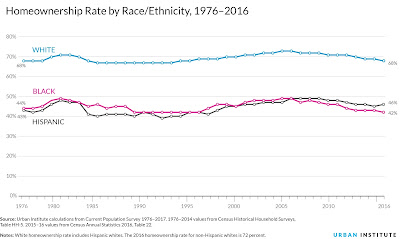 With these data in mind, I covered points from William "Sandy" Darity's article about the racial wealth gap in The Atlantic, entitled "How Barack Obama Failed Black Americans".

Darity gives examples of how black Americans have been deprived of wealth throughout history. There was the failure to deliver on the promise of land for former slaves, a.k.a. 40 acres and a mule (Henry Louis Gates Jr. talks about this at length here). I asked my students to raise their hands if they didn't know what the phrase "40 acres and a mule" refers to. A lot of hands in my mostly white classroom went up. Darity also mentions the GI bill -- this post at Demos by David Callahan talks about black veterans being excluded from the housing benefits of the bill because banks wouldn't give loans for mortgages in black neighborhoods. Also, Callahan writes, "African-Americans were excluded from the suburbs by a combination of deed covenants and informal racism."

Darity expresses his frustration that then President Obama too often veered into the politics of personal responsibility. Darity writes: "it has been damaging to have Barack Obama, a black man speaking from the authoritative platform of the presidency, reinforce the widely held belief that racial inequality in the United States is, in large measure, the direct responsibility of black folk." Obama would call out black people despite there being, Darity writes, "no evidence to demonstrate that are proportionately more blacks who behave in ways that undercut achievement, especially since it is clear that blacks do more with less." He is also frustrated that Obama didn't pursue bold, transformative policies that could actually reduce the wealth gap.

I said to my students that Darity's article could also be titled "Show Me The Policy". He writes: "The Obama administration never gave serious consideration to aggressive transformative universal policies like a public-sector employment guarantee for all Americans, a federally financed trust fund for all newborn infants with amounts dictated by a child’s parents’ wealth position, or the provision of gifted-quality education for all children."

I focused on his idea about child trust accounts that he calls Baby Bonds. I love this idea. My students were intrigued by this idea. I summarized the idea by reading a portion of a report Darity co-authored with Darrick Hamilton, Anne E. Price, Vishnu Sridharan, and Rebecca Tippett. The report is "Umbrellas Don’t Make it Rain: Why Studying and Working Hard Isn’t Enough for Black Americans". This is what I read to my students (emphasis mine):

"These accounts could provide an opportunity for asset development for all newborns regardless of the financial position into which they are born. The program is analogous to a social security plan that would provide capital finance for young adults to begin a lifetime of building assets and economic security independent of the financial positioning and decision making of the families in which they are born.  The program would be universal, but the amount of the account endowment would be graduated on the basis of the child's parental wealth. We envision endowing American newborns with an average account of $20,000 that gradationally rises to $60,000 for babies born into the lowest wealth families. The accounts would be federally managed and grow at a federally guaranteed annual interest rate of 1.5–2 percent. They could be accessed when the child becomes an adult and used for asset-enhancing endeavors, such as purchasing a home or starting a new business. With approximately 4 million infants born each year, and an average endowment of around $20,000, we estimate the cost of the program to be $80 billion. In relative proportional costs, this would have constituted only 2.2 percent of 2012 federal expenditures."

This is the kind of bold policy move that could actually help reduce the racial wealth gap!!!

In this 20 minute interview, Darity talks more about the wealth gap and the Baby Bonds idea:

By the way, as we see in the following 6 minute video, Americans say wealth should be distributed in a more equitable way!

Update 10/22/18: Sarah Kliff at Vox wrote an explainer on baby bonds, and mentions that a proposal by Cory Booker is similar to ideas from Darity and Hamilton.
Posted by Todd Schoepflin at 9:03 AM